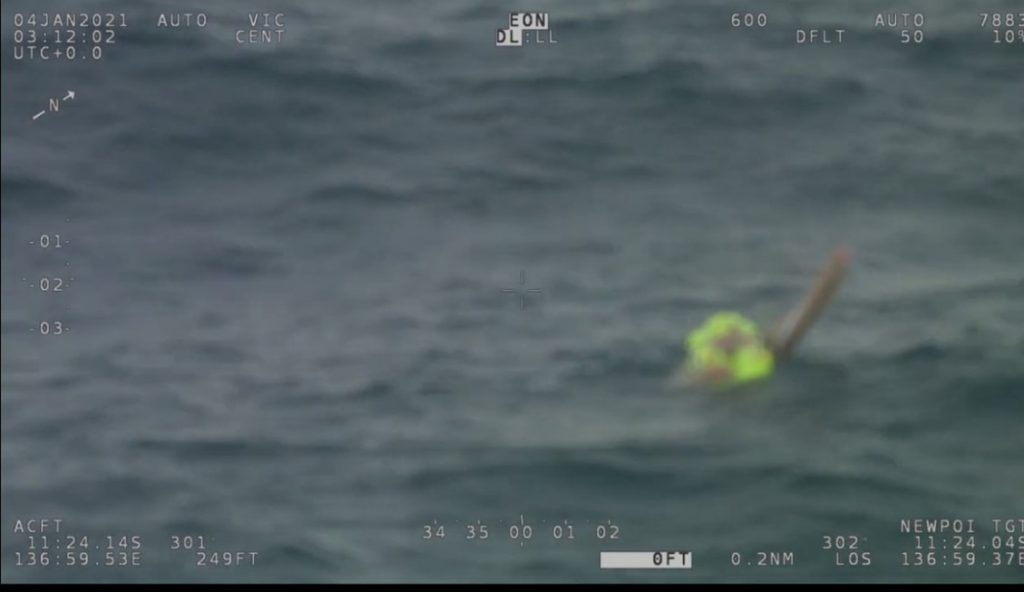 Melbourne, Australia, 11th March 2021 – Sentient Vision Systems today proudly announced the crucial role that ViDAR played in the rescue of Nigel Fox by the Australian Maritime Safety Authority (AMSA) on 4th January 2021. Nigel had been knocked overboard from his yacht during a storm over 90 Km out in the Arafura Sea off Northern Australia.

Having activated the Personal Locator Beacon (PLB) attached to his lifejacket, AMSA were able to locate the area where the signal was coming from and tasked the Challenger CL-604 search and rescue jet from Cairns to locate him.

After over 8 hours in the water, Nigel was over 23 Km from his yacht when located.

Noting the difficulty of locating Nigel in the large expanse of open sea, Aircraft Mission Coordinator Ollie Marin onboard the Challenger said “What actually picked him up was three cameras on the nose of the aircraft called ViDAR, which is actually a technology to automatically detect different colour and shape based on the background of the water. Thanks to Nigel’s bright lifejacket, the cameras automatically took a picture and gave his position, and then we set up to drop a life raft.”

“We are very proud that ViDAR was able to play a part in saving Mr Fox’s life” said Dr Paul Boxer, Managing Director of Sentient. “It is rewarding for us to see the difference that our technology makes to the safety of those in danger at sea. We wish the very best for Mr Fox and appreciate the dedication of everyone involved in the rescue”.

Developed in Australia, ViDAR, the world’s first Optical Radar, has been deployed on the AMSA Challenger jets, operated by Cobham, since 2016. Specifically used to find life rafts and people lost at sea, ViDAR has played a role in countless search and rescue missions during that time.

In addition to AMSA, ViDAR is currently used by many other agencies and forces worldwide including the Royal Australian Navy, the US Coast Guard, Mexican Navy, and the Canadian Department of Fisheries and Oceans for a broad range of search missions including search and rescue, illegal fishing, counter narcotics, and maritime security.