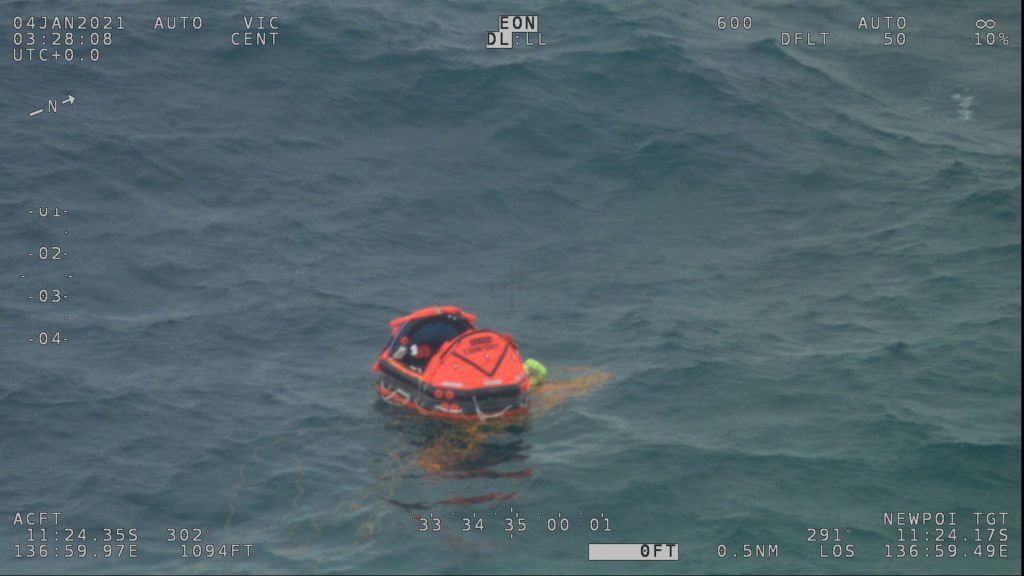 They say that luck is a combination of preparedness and opportunity. By that measure, Nigel Fox must be one of the luckiest people alive. On 4 January 2021, he was alone on his yacht with only his cat, Stinky, for company. They were 90km off northern Australia, in the Arafura Sea, when he was knocked overboard during a storm.

He was wearing a life jacket: that was his first piece of ‘luck’. The lifejacket had a Personal Locator Beacon (PLB) attached to it: that was his second piece of ‘luck’. He activated the PLB which resulted in the Australian Maritime Safety Authority (AMSA) initiating an aerial search for him. AMSA’s Bombardier CL-604 Challenger localised his position thanks to the PLB, but he was actually spotted by the aircraft’s underbelly mounted ViDAR™ system which detected him in the water despite the sea state and guided the aircraft to his exact location; that was his third piece of ‘luck’. The AMSA Challenger dropped him a life raft and he was able to scramble to safety.

Yes, Nigel Fox was ‘lucky’ – but he made his own luck. And AMSA had a bit of help, too.

The story of his rescue illustrates the value and capability that ViDAR (for Visual Detection and Ranging) brings to Search and Rescue (SAR) operations, and the reason why AMSA’s Challenger 604 Tier 1 fixed wing aerial search asset has ViDAR fitted.

ViDAR is the world’s first Optical Radar; it employs Artificial Intelligence (AI), Computer Vision and Deep Learning to process onboard video imagery in real time. It’s capable of detecting very small objects on the ocean surface that would otherwise be invisible to a visual observer and other sensor payloads. ViDAR has been designed by Sentient Vision Systems located in Melbourne, Australia.

On SAR aircraft, ViDAR consists of multiple fixed Electro-Optic and Infrared (EO/IR) high resolution cameras with a combined field of view of about 180 degrees, providing a wide area sensor sweep width. The video imagery feed is processed frame by frame in real time. If ViDAR detects a target it alerts the operator by sending a thumbnail image to the mission system display and a geolocation marker on a moving map display that provides the object’s updated location, bearing and range from platform. The operator can then cross-cue the platform’s inspection turret for further investigation or direct the pilot onto its location.

A typical SAR mission would normally require a mix of ‘Mark One Eyeball’ trained visual observers, search radar and a turreted EO/IR sensor which can be trained in any direction but is normally used to sweep the search area and investigate objects that a visual observer has spotted. The search area itself would usually be known in advance and the effects of winds and currents taken into account in determining where to begin the search.

But even a high-resolution EO/IR sensor has only a narrow field of view. It can’t cover the entire ocean surface continuously. High sea states might obscure objects intermittently. And sometimes the object is so faint or obscure that the operator can’t see it. Factoring in platform speed, environmental factors or operator fatigue towards the end of a long mission, it would be easy to simply miss a small, ambiguous, hard-to-spot object – that has happened as well.

This is the value of ViDAR: it maintains autonomous, persistent wide-area surveillance across a 180 degree swath ahead of the aircraft. A ViDAR-equipped helicopter flying at 90kt and 1,500ft can scan a surface swath about 3.2 nautical miles wide when configured for SAR. Within that swath it can spot small, semi-submerged objects the size of a human head. It has demonstrated detection rates of up to 96% – and it can cover a designated search area 30 times faster than an aircraft without ViDAR. A bigger target such as an upturned fibre glass dinghy is even quicker to find and easier to spot, even if it’s almost invisible to a conventional radar due to its low radar cross-section – from 5,000ft the ViDAR sweep width is 10nm, and it doesn’t miss targets of that size.

The ViDAR software is easily integrated into existing mission management systems such as CarteNav’s AIMS-ISR system; the EO/IR cameras have a very low Size, Weight and Power (SWAP) impact and the company’s own field teams support the integration process and provide onsite and remote training to operators.

ViDAR is starting to revolutionise SAR operations. Operators including AMSA have proven its value on both manned aircraft and UAVs such as the Insitu® Scan Eagle. ViDAR delivers three main benefits: firstly, and most importantly, it increases by an order of magnitude the likelihood of finding a survivor in heavy seas, both by day and by night, which ultimately increases survival rates.

Secondly, it reduces the direct operating cost of mounting a sustained SAR presence over a coastline or stretch of open sea. Not only does ViDAR enable searches to be undertaken far more quickly, with less wear and tear on air assets, it also reduces operator fatigue and task saturation: operators remain fresher and more alert over time.

Thirdly, ViDAR can be mounted on both manned aircraft (fixed and rotary wing) and UAVs with Sentient now also providing quick install, all-in-one ViDAR VMS pods. The difference in direct operating costs between a manned aircraft such as a P-8A Poseidon, P-3 Orion or A400M (as used recently in a short-notice contingency) and a UAV is exponential. So is the difference in operating architecture: depending on the sea area concerned, a number of UAVs could be launched to conduct independent searches simultaneously and relatively inexpensively, with their imagery being fed back to a ground-based control centre.

A UAV could then hold over the survivor until a rescue ship or helicopter arrives on scene – the cost of keeping a UAV on station is far less than that of keeping a manned aircraft there. And, taking a cue from Surf Life Saving Australia, a new generation of drones could be equipped with droppable stores to air drop to survivors while they’re awaiting rescue.

That’s the sort of lateral thinking about resources and the most economic application of effort that’s enabled by a system like ViDAR.

And if you’re wondering what happened to Nigel Fox’s cat, Stinky was safe and dry aboard the yacht when it was recovered a day or so later – 130nm from where Nigel was washed overboard, which only underlines the difficulties of mounting a SAR operation in open water and the contribution that ViDAR makes.