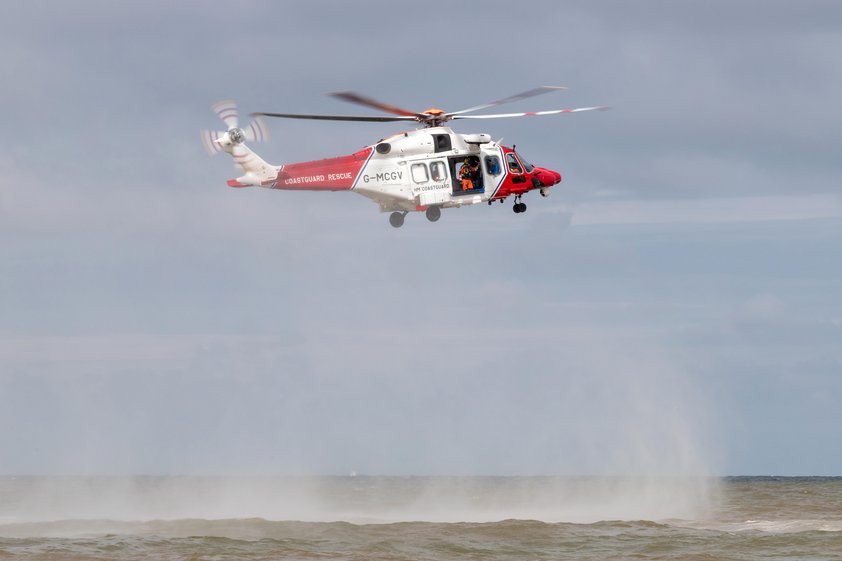 What price a human life? It’s wrong even to think such a thing, of course: human life is precious and priceless and nobody begrudges essential humanitarian expenditure. But somebody still has to pay for Search and Rescue (SAR) helicopters and fixed-wing aircraft that can cost up to US$15,000 an hour to fly.

But despite this, a successful maritime SAR mission still depends to an uncomfortable degree on the Mark One Eyeball and luck. Big, metal ships are relatively easily spotted – it’s small boats, swimmers and survivors in the water that are the biggest challenge. Operators are crying out for a technological step-change that can improve dramatically the likelihood of spotting them.

Luckily, a range of technologies has emerged in recent years that, together, represent an order of magnitude increase in the likelihood of SAR success. They can also reduce significantly the cost of conducting possibly quite lengthy searches at extended ranges over the sea.

The first of these is a technology that has been proven to detect even head-size objects on the sea surface, by day and night in conditions up to Sea State 6: this is ViDAR, for Visual Detection and Ranging. Its manufacturer, Melbourne-based Sentient Vision Systems, has supplied ViDAR to operators who’ve used it successfully aboard a number of manned and unmanned, fixed-wing and rotary wing platforms since 2016.

ViDAR is, in effect, an Optical Radar and consists of multiple fixed, high-resolution cameras with a combined Field of View (FoV) of 180 degrees. Mounted in an external pod or internally aboard the aircraft, from an altitude of 1500ft at a speed of about 90kt, they scan a surface swath 3.2 nautical miles wide to find a person in the water. If the mission objective is to find a lost pleasure boat then the ViDAR swath is increased to 16nm from 5,000ft. If the target is within its field of view, ViDAR will spot it, even in Sea State 6 – it has a proven Probability of Detection of 96%. The ViDAR software then provides a thumbnail to the operator’s mission system showing the target and its location and enabling the operator to slew the primary sensor towards it for inspection.

ViDAR’s unprecedented high detection rate means a helicopter or aeroplane can fly in a much wider search pattern, covering up to 300 times the sea area on a given SAR mission. The casualty’s chances of survival are enhanced immeasurably by the speed with which it’s now possible to be found.

This is what satisfied ViDAR customers such as the Royal Australian Navy, Australian Maritime Safety Authority, US Coast Guard and others have already discovered. For them ViDAR isn’t a promise: it’s a game-changer.

Once the target is spotted – it might be a survivor in the water with only a head visible, or a small, wooden boat that’s invisible to radar, or a dinghy from an upturned yacht – other key SAR technologies come into play: GPS, high resolution EO/IR camera turrets, searchlights with bore-sighted laser rangefinders, Helmet-Mounted and Head-Wearable Displays (HMD and HWD). These increase operator safety, especially close to land, at night and when locating and winching up survivors, but unless the survivors have activated an Emergency Position Indicating Radio Beacon (EPIRB) these systems don’t actually help detect and locate the survivor in the first place. And many distressed mariners don’t have an EPIRB.

Another big technology breakthrough is Unmanned Aerial Vehicles, or UAVs. Most UAVs and some aircraft are too small to carry a radar, but ViDAR offers similar capabilities with much lower space and weight constraints. Fixed-wing UAVs such as the Insitu ScanEagle used by the US Coast Guard have the range, endurance and payload capacity to make it worthwhile carrying a ViDAR sensor, as their operators have discovered. Not only can UAVs be launched and recovered quickly, their operating costs per flying hour are miniscule compared with a manned helicopter or aeroplane. The US Coast Guard has demonstrated it can surveil almost 14,000nm2 of ocean in 12 hours at 60kt using ScanEagle with ViDAR.

A UAV or, better, a couple of UAVs can cover a significant sea area with their onboard ViDAR systems feeding data back to a manned platform which then goes straight to the rescue location. So SAR becomes quicker and more economical – a single airborne sensor operator with two UAVs available suddenly has 600 times the area coverage of his or her predecessor using a single EO/IR sensor.

A third technology breakthrough is communications networking which enables this wireless data feed from a ViDAR-equipped UAV to a manned ‘mother ship’ or even a real ship or shore base.

The fourth technology breakthrough is something that Sentient Vision has been refining for a decade: Artificial Intelligence (AI) and machine learning, which use constantly refined algorithms to detect, identify and classify targets, instruct the signal processor to ignore anything irrelevant and flash up a thumbnail on the operator’s mission display showing the direction and location of the target. Proper integration means that ViDAR can cue the aircraft’s primary sensor right on to the target and guide the pilot directly to its location.

Modifying a UAV, helicopter or aeroplane to carry a ViDAR sensor pack and associated signal processor is simple: ViDAR’s Size, Weight and Power (SWAP) requirements are very low so modifying an existing platform or building it into a new aircraft is relatively cheap and easy.

ViDAR is the technology breakthrough the SAR and maritime security communities have been waiting for. And it’s not paperware: it’s been proven.