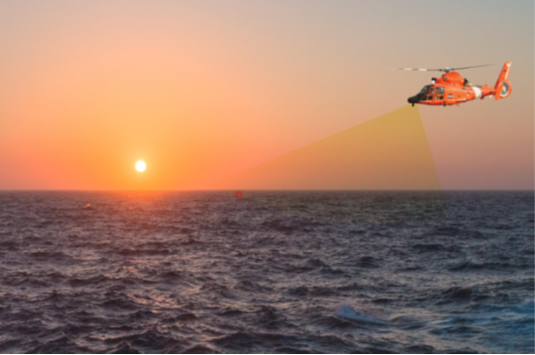 There’s a good reason why bad things happen at night: often nobody can see them happen, so nobody comes after the perpetrators. Any sea area, any stretch of coast could be the scene of illegal activity after dark: drug smuggling, people smuggling, illegal fishing, terrorism, even comparatively minor crimes such as petty vandalism and theft. Perpetrators all too often get away with what they do because the chances of them being seen, and then arrested, are so slight the rewards more than justify any risks.

Until now. A sensor system that has made a game-changing difference to maritime patrol and surveillance during the day is now available for night time and low light use as well.

ViDAR (for Visual Detection and Ranging) is the world-first technology that turns an Electro-Optic (EO) or Infrared (IR) sensor into a passive, persistent, wide area, optical radar. In EO maritime patrol operations, it has a proven detection rate for human head-size objects in the water of 96%, even in Sea State 6. Small wooden, glass fibre or rubber boats with a small radar cross-section, the types favoured by criminals, are easily spotted.

And it’s passive: unlike a radar which emits a signal that can be detected, ViDAR surveillance can’t be detected by the subject, meaning it is well suited for covert operations.

Sentient Vision Systems, the Melbourne company that manufactures ViDAR, has been working on Night ViDAR to suit a range of operational needs. Its initial focus has been on enforcement operations: detecting, geo-locating and tracking small craft engaged in illegal activities.

Imagine a scenario where a narcotics smuggler aims to carry an illegal cargo across a stretch of water to a remote landing site on the coast. The authorities mount a standing patrol over that sea area consisting of a manned aircraft to detect potential wrong-doers.

Ordinarily, using a search radar and a standard EO/IR sensor turret, the air platform would cover the area quite slowly. The radar might not pick up every potential target, so the platform still needs to cover the entire search area.  But the narrow field of view of the EO/IR sensor – about 2-3 degrees – means this is a slow process. And even then, the target may slip past while the aircraft is searching another patch of water.

Night ViDAR allows operators to work as they would by day. It consists of multiple fixed IR cameras with a combined Field of View of 180 degrees. As always, work rate depends on target type but to detect something like a low-profile fast boat an area search could be done 30 times faster than a platform lacking Night ViDAR.

An aircraft or UAV equipped with Night ViDAR can surveil the search area and detect targets quickly and then help maintain situational awareness for as long as required. Night ViDAR notifies the operator of potential targets by putting a thumbnail of the contact on the main situation display.

Depending on the level of integration, the operator can then slew a turreted EO/IR sensor onto the target to examine it more closely, or Night ViDAR can slew the turreted sensor automatically. Depending on the tactical requirements, the airborne platform can then remain discreetly out of sight and shadow the target, or close in and announce its presence.

Being able to surveil a specific search area at least 30 times faster than before has three important benefits. Firstly, the window of opportunity for illegal operators is reduced significantly: a quick dash after dark across a narrow strait or a lake, or along a remote stretch of coast, no longer gives them a good chance of escaping detection. There are even fewer places for them to hide, and darkness is no longer a cloak.

Secondly, because it is passive and can be mounted easily on a UAV which is very hard to see and hear in darkness, Night ViDAR can be covert. It’s possible to mount a surveillance operation without suspects even being aware of it.

Thirdly, the economics of mounting any kind of Maritime Patrol operation are changed significantly. Night ViDAR enables a manned platform to undertake a search faster and with significantly lower operator fatigue and wear and tear on the platform. Or it can be installed on both small and large UAVs. In such a case, the UAV is a surveillance platform streaming its imagery feed to an operator on a ship or ashore. The operator may control multiple UAVs operating persistently as a cooperative swarm; most can continue with their surveillance task while the operator directs one of them, or even a separate manned platform, to investigate a suspicious contact in more detail.

Now that Night ViDAR is available, darkness no longer conceals criminals and terrorists at sea. The ability to use an IR sensor as a passive, optical radar, and the resulting speed with which targets are detected, can transform night-time maritime patrol and search operations.