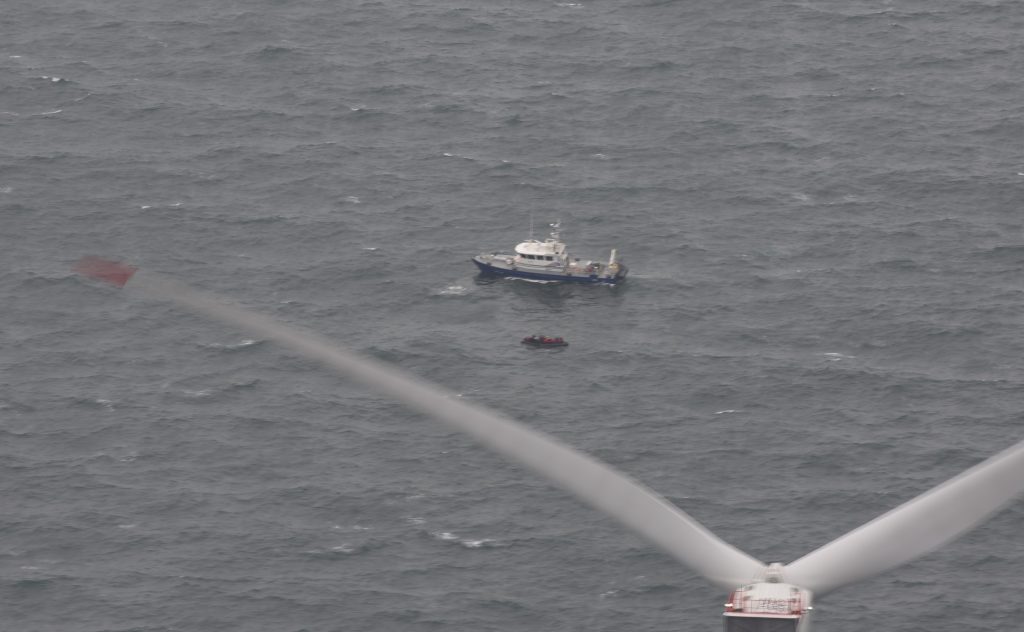 In October 2021 the Special Mission Aircraft Division of Austrian aircraft manufacturer Diamond Aircraft undertook a series of demonstrations of a new surveillance and Search and Rescue (SAR) capability, based on its DA42 twin-engined light aircraft, the DA42 MPP.

In a remarkable turn of events, during its demonstration program this aircraft was tasked at very short notice with a live SAR mission over the North Sea to rescue 24 migrants who were adrift for 48 hours, which it completed successfully and very quickly. Its success was due largely to its sensor payload.

It was also fitted with the ViDAR VMS-5 surveillance pod, designed by Australian company Sentient Vision Systems. ViDAR stands for Visual Detection And Ranging and is the world’s first optical radar system. It uses Artificial Intelligence (AI) and Computer Vision in an on-board processor to search each frame in the imagery feed from an Electro-Optic or Infrared (EO/IR) sensor to detect moving targets as small as a human head in the water which would be either completely invisible to a human operator or extremely hard for him or her to spot.

Once it detects a target the ViDAR software simply generates a thumbnail on the operator’s MMS screen showing the target and its location. This enables the operator to slew the aircraft’s inspection camera to the target and examine it in more detail. From an altitude of about 1,500ft and at an airspeed of 90kt, if the target is within the sensors’ field of view ViDAR will spot it in the imagery feed in conditions up to Sea State 6 with a 96% probability of detection on the first pass. It enables an airborne search platform to cover a designated area up to 300 times faster than one without ViDAR.

On this demonstration the VMS-5 pod was equipped with an array of five EO/IR sensors and eight Long Wave Infrared (LWIR) sensors configured for night and bad weather operations with a combined 180 degree Field of View forward and sideways from the aircraft. The pod was belly mounted on the DA42’s centre line using an industry standard Meeker mount. The DA-42 is already certified to carry much larger and heavier centre line stores, so the 21kg VMS-5 pod required no further certification and, being small, created very little drag.

The centre line umbilical connection provided the VMS-5 pod’s power and fed processed imagery from its EO/IR sensors direct to the MMS. On this occasion the DA42 MPP did not have a fully functional AIS fitted. An operator from Sentient Vision operated the aircraft’s MMS.

The demonstrations, on 26 and 27 October, were in partnership with Belgian specialist aircraft operator North Sea Aviation Services (NSAS), based in Oostende, for the Belgian Maritime Rescue Coordination Centre (MRCC). NSAS is already a DA42 operator but this was the first time a DA42 had been fitted with the VMS-5 pod.

The MRCC at this time only had a couple of flying assets it could call upon: a Belgian Coastguard NH90 helicopter, equipped with a turreted EO/IR sensor; and a BN Islander equipped with an AIS and a sensor to detect atmospheric pollution emitted by ships.

SAR missions are extremely difficult. The likelihood of detecting a target the size of a human head in the water, even on a calm day in good visibility, is not high and falls dramatically in darkness, poor visibility and heavy seas. So the MRCC was naturally interested to see what capability advantages an aircraft such as the VMS-5-equipped DA42 MPP might be able to offer.

The first demonstration flight had the Director of the MRCC aboard as an observer. He saw the DA42 MPP search for a dummy dropped in the water by the Belgian Coastguard; it was located and identified quickly. This flight was followed by a demonstration of the DA42 MPP’s wide-area maritime surveillance capabilities and ended with a second ‘survivor search’, again using a dummy dropped into the water. Once again, the ‘survivor’ was located quickly, despite the poor weather and sea conditions, impressing the MRCC and NSAS observers.

The following morning a presentation by Diamond Aircraft and Sentient Vision Systems to NSAS and the Coast Guard personnel was terminated abruptly when the aircraft was tasked by the MRCC to undertake a live SAR mission in the North Sea. An inflatable craft with 24 migrants aboard had been adrift in the North Sea for 48 hours after running out of fuel – this was an open boat with no environmental protection for its occupants at all. The alarm was raised when one of them used a mobile phone to call for help. The only positional information he could provide was that the vessel was near an offshore windfarm.

No other aircraft was available at that time to commence a search. However, the Director of the MRCC had been so impressed by the capability of the VMS-5-equipped DA42MPP the day before he gave permission for it to be tasked with the search.

The DA42 MPP was airborne within 10 minutes.  Conditions were typically bad for the time of year: winds north easterly at 25-30kt, Sea State 4-6 with a 3-4m swell, a tidal flow at that time of approximately 2kt, bearing 070 degrees, and a cloud base of approximately 1,200ft.

Belgium’s 100km coastline is essentially one long offshore windfarm with wind generators positioned to catch winds off the North Sea and English Channel. A radar equipped aircraft would have had trouble detecting the inflatable, for three reasons: firstly, it was made of rubber with very few metallic parts; secondly, the sea conditions would have created a great deal of surface ‘clutter’ for a radar sensor; and finally, being in a windfarm, the radar would have detected lots of wind generators but would likely have failed to detect a small, hard to spot target close to the base of one of them.

Using tidal flow modelling to calculate the initial search area, the NSAS/Sentient crew began their search as soon as the aircraft was over the sea. The weather conditions forced them down to 1,000ft at a speed of 120kt, less than ideal conditions for a ViDAR sensor, but within 20 minutes they had located the inflatable, close to one of the massive wind generators; soon they were within visual range, about 1nm. The DA42 circled the target, keeping it in sight until relieved by a Belgian Coastguard NH90 helicopter carrying a medic who tended to the 4 most hypothermic migrants. This was followed shortly by a high-speed rescue boat for the remaining 20 migrants.

By the time the customer presentation was scheduled to end, the Sentient/NSAS team aboard the DA42 MPP had located the survivors, guided a helicopter and rescue boat to them and returned to base at the end of a successful live mission that demonstrated convincingly the capability of the DA42 MPP and the VMS-5 pod.

ViDAR VMS-5 pod helps save 24 migrants off the Belgium coast.