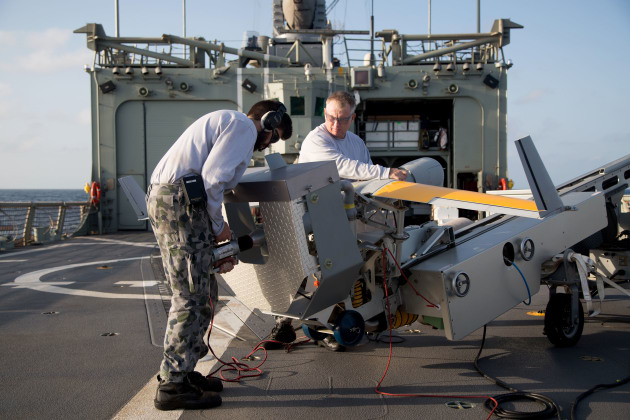 In October 2017 the Royal Australian Navy completed its first operational evaluation of the Boeing Insitu Scan Eagle unmanned aircraft system aboard an Adelaide Class Guided Missile Frigate in the Gulf of Oman.

Sentient was there, with its Visual Detection And Ranging(ViDAR) optical radar fitted as part of the ScanEagle’s sensor suite. As shown by the Australian Defence Magazine article below, the RAN put both the ScanEagle and ViDAR to the test.

The RAN has completed operational evaluation (OPEVAL) of the ScanEagle Unmanned Aircraft System(UAS), including the first concurrent tasking – aboard HMAS Newcastle – and an embarked MH-60R helicopter.

Defence said Newcastle’s MH-60R and ScanEagle were employed in September on concurrent surface search sorties in the Gulf of Oman during the frigate’s current deployment to the Middle East as part of Operation Manitou.

Four ScanEagles have been embarked on Newcastle as part of an OPEVAL to support the introduction of Maritime Tactical Unmanned Systems and their teamed employment with manned aircraft under Project
Sea 129 Phase 5.

Due to the longer endurance of ScanEagle and the need to ensure safe recovery of the manned aircraft to the single flight deck, the MH-60R was operated after ScanEagle launch and prior to its recovery.

According to Defence, ScanEagle was equipped with the ViDAR (video detection and ranging ) system that automatically detects surface contacts and alerts the operator to objects of potential interest.

The UAS had been fully integrated into Newcastle’s ADACS (Australian Distributed Architecture Combat System) enabling the live streaming of ScanEagle imagery to the operations room for analysis and exploitation.

The UAS had earlier conducted surface search and persistent, covert surveillance in support of CTF 150 maritime security operations, including chokepoint transits in the Bab al Mandeb, the strait connecting the Red Sea to the Gulf of Aden, Defence said.

The ViDAR system deployed on the RAN’s ScanEagles is produced by Melbourne company Sentient Vision Systems, which says ViDAR can scan approximately 13,360 sq nautical miles of ocean in 12 hours when operated at 60 knots.
Article used with permission of Australian Defence Magazine. Find the original article here.