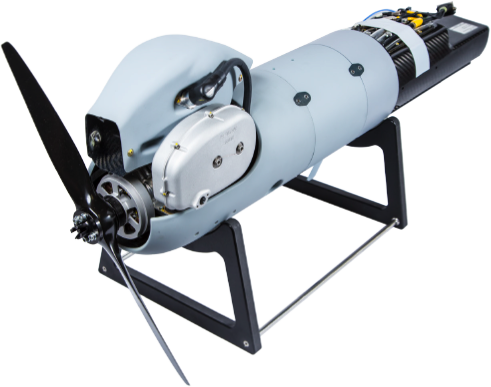 ScanEagle: American made, with an Australian twist

While most proponents of unmanned vehicles and surveillance are familiar with the world-beating Boeing Insitu ScanEagle tactical UAS, few know that much of its reputation for reliability and endurance comes from an Australian made propulsion system.

The three-metre wingspan ScanEagle, built in the US north west state of Oregon, has come to dominate the tactical UAS market. With an endurance of more than 24 hours, cruise speed of 50 to 60 knots and a suite of sensors and video datalinks, the aircraft has utility for both military and civil customers. In addition to the military surveillance missions for which it is best known the ScanEagle has launched on tasks as diverse as forest fire monitoring, maritime surveillance, search and rescue and ice floe detection for offshore oil rigs.

The ScanEagle is now in service with more than 20 customers and has flown around one million hours. With first flight in 2002 it has been around longer than many realise, long enough even for at least two to be consigned to museums including an example that flew more than 2000 hours in support of Canadian forces in Iraq and Afghanistan and the ScanEagle now in the Seattle Museum of Flight that was part of a rescue mission to free Captain Richard Phillips from Somali pirates, later immortalised in the Tom Hanks film Captain Phillips. But a recent upgrade to the ScanEagle’s systems has brought an Australian connection, through Perth-based Orbital Corporation.

Orbital then expanded in to lightweight engines of its own design as well as research and development for customers. Ironically, its first big break was to Insitu competitor Textron for its Aerosonde UAV, before working with Insitu on the new N20.

Orbital bills its N20 heavy fuel propulsion system as the first reciprocating internal combustion engine designed specifically for UAS applications. It is fielded as an integrated self-contained package including compact fuel and oil tank modules to simplify UAS assembly and allow in-field servicing. The propulsion system monitors its own critical systems, sensors and actuators and even includes a “black box” data recorder.

The legacy of precise fuel injection improves the N20 engine across a myriad of performance targets. It means better fuel economy, which increases endurance without increasing fuel load. It also improves reliability and an engine’s power to weight ratio. In the ScanEagle’s case, it has also ensured the engine is receiving its required metering of fuel regardless of the air pressure changes the UAS can experience between sea level and its ceiling of more than 19,000 feet.

It also has other critical benefits, such as reliable starting of heavy-fuel engines even at the sub-zero temperatures in which many ScanEagle customers expect to operate.

In 2016 the company signed a three-year deal worth up to $120 million to provide Insitu with the N20 engine for ScanEagle. The initial deal was expected by most to be simply the beginning of a long term relationship, underpinned by Orbital’s next announcement that it was scouting locations close to Insitu’s Oregon plant for a new assembly and development facility.

In December 2017 the company confirmed it intends to have a new 1210 square metre facility ready for occupation in Ford Hood by February 2018, with UAV engine assembly and overhauls scheduled to begin by mid year. Initially designed to support Orbital’s existing Insitu commitments, the facility will allow future growth in to component and engine development, validation and testing.

“Securing this priority location for our business marks a significant milestone for the Company and underpins Orbital’s UAV vision and US market growth strategy,” said Orbital Corporation Chief Executive Officer Todd Adler. “We have been looking for the right property for Orbital’s needs for some time.”

Orbital sees a permanent US presence as a foothold in a market expected to grow consistently for the foreseeable future. The US Department of Defence estimates that between 2015 and 2035 the fleet of drones operated by US Government agencies alone will grow from a few hundred to around 10,000. The global market is expected to be worth US$28 billion by 2022, with the military sector
tipped to grow at around 38 per cent per year to US$13.9 billion by 2026.

By any estimation the odds are good that many of those aircraft will be Insitu ScanEagles built in Oregon, powered by an engine stamped Made In Australia.

Caption for pic.
The Orbital Corporation N20 is a self-contained package including its own “black box” data recorder.