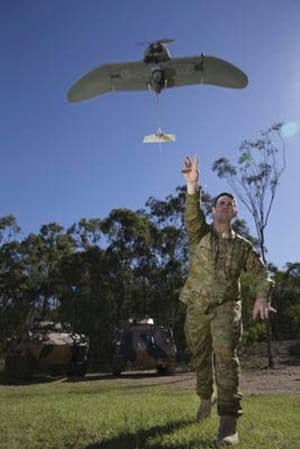 As armed forces have increasingly deployed unmanned aircraft systems (UAS) in larger numbers generating vast amounts of video data to be analysed, the pressing need to automate the processing of this data to the greatest extent possible has become abundantly clear.

The introduction of software that can automatically detect potential objects in real-time through analysis of aerial surveillance video over land and water has enabled operators to make sense of this deluge of data, producing actionable intelligence.

But truly taking this mission-critical intelligence, surveillance and reconnaissance (ISR) capability to the next level of performance has required embedding the detection capability into the air vehicle itself.

Under the traditional data-processing model, raw video would be fed from an unmanned aerial vehicle (UAV) down to the ground to be processed at the ground station.

Today, the processing system can be embedded along with the sensor aboard the aircraft.

The data is analysed in its purest form, without degradation, enabling autonomous detection systems to find very small objects across much wider areas than previous possible – having a significant effect on the usefulness of each UAV.

Another key advantage of adopting the embedded systems approach is that onboard data processing helps to reduce bandwidth requirements.

Leading the way is Australian company Sentient Vision Systems, which has overcome size, weight and power (SWaP) constraints to successfully complete the miniaturisation of the technology that drives its proven object-detection system known as Kestrel.

And this scalable system is available now for integration with the full range of current and future UAVs, from small platforms such as the hand-launched Wasp to multi-mission remotely piloted aircraft.

Kestrel is capable of working autonomously and persistently to detect movement within electro-optical (EO) and infrared (IR) video, picking up objects that would be too small or slow-moving for the human eye to see, particularly when the operator is fatigued.

The system’s ability to discern an object that appears as a tiny blip measuring just a few pixels in the image means the sensor can be zoomed out further and therefore covers a much wider area in a given period of time.

Simultaneously tracking multiple objects of interest over land, the software displays a trail of ‘breadcrumbs’ that indicate the path taken by each detected object. This makes the process of scanning an area for potential threats as streamlined as possible.

Kestrel software has already been deployed on more than 1,700 systems on 6 continents around the world with a wide range of manned and unmanned air platforms. It is proven in theatre in support of the Australian Defence Force (ADF) and Australia’s allies, including the USA and Canada.

The autonomous detection software solution was initially developed by Melbourne-based Sentient with help from the Capability & Technology Demonstrator Program.

Having been introduced into service in 2010, Kestrel has since been deployed as an integral part of all of the ADF’s operational unmanned systems, including the Royal Australian Air Force’s Heron and the Australian Army’s Shadow and ScanEagle.

Kestrel has been progressively enhanced throughout the intervening years as a result of close collaboration between Sentient and the Australian Department of Defence. And the system has proved its worth time and time again, supporting missions in Afghanistan, Iraq, Libya and elsewhere.

Looking ahead, the automated object-detection software will be deployed by the ADF with its new Wasp AE micro air vehicle capability, which is set to be delivered by AeroVironment over a three-year period from July this year.