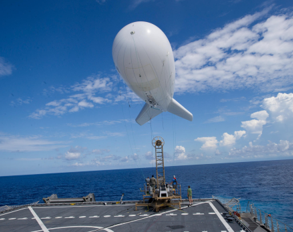 Whether the task is border protection, coastal surveillance or disaster relief, the benefits of maintaining an aerial observation capability for extended periods of time are well understood.

Manned aircraft and unmanned aerial vehicles (UAVs) may well have a role to play, depending on the mission.

But for many potential operators, including those on tight budgets, these types of airborne platforms can be expensive and fairly difficult to use. And, importantly, they are limited in their endurance.

Enormous helium-filled balloons might at first glance look rather unsophisticated in this age of miniaturisation, but there is a growing realisation that tethered aerostats and airships could be the answer.

Equipped with a range of sensors, these lighter-than-air platforms provide users with the ideal elevated platform from which to build truly persistent, wide-area surveillance capabilities, with time on station that is measured in weeks, not hours.

Aerostat systems are easily transportable and rapidly deployable, and robust enough to withstand adverse weather conditions. They can be operated not only from land but also from ships out at sea, and their constant presence can have a significant deterrent effect.

Crucially, they are cost-effective to operate.

The US Army deployed the Persistent Threat Detection System (PTDS), a tethered aerostat fitted with surveillance equipment capable of gathering intelligence from an altitude of 15,000 feet, in Iraq and Afghanistan.

US Customs and Border Protection (CBP) employs the Tethered Aerostat Radar System (TARS) to detect and track suspicious aircraft at a range of about 320 km.

Meanwhile, the Philippine Navy has taken delivery of a TARS aerostat in an effort to enhance its maritime intelligence, surveillance and reconnaissance (ISR) and humanitarian assistance and disaster relief (HADR) capabilities.

And the Republic of Singapore Air Force (RSAF) has introduced a tethered aerostat system with onboard radar to detect airborne and maritime threats, operating at 2,000 feet above the city-state.

Every nation needs an effective and affordable system that offers a continuous, wide-area surveillance capability and timely provision of target information.

With millions of hours logged in the course of an operational history that spans many decades, aerostats and airships are ideal platforms on which to base persistent observation capabilities for a wide range of applications.

These include border protection, coastal surveillance and disaster relief, as well as anti-smuggling, counter-piracy and counter-insurgency missions.

But simply generating round-the-clock video feeds that cover areas of interest is not enough. Taking these systems to the next level of performance requires harnessing the power of automation.

While aerostats can stay aloft for weeks at a time, employing an army of human analysts to keep an eye on screens 24/7 would be prohibitively expensive.

To be cost-effective, surveillance systems must incorporate software that is designed to shoulder the burden of analysing hour after hour of full-motion video, picking out objects for further examination.

Australian company Sentient Vision Systems pioneered the use of artificial intelligence (AI) software solutions in the field of imagery analysis, creating products that are capable of automatically detecting moving objects.

ViDAR (Visual Detection and Ranging) is a wide-area optical search system that autonomously finds objects on the surface of the ocean in real time.

Its detection performance is impressive, offering an automated surveillance capability that is far more powerful than the human eye.

At an aerostat’s typical operating altitude, real-world evaluations have shown that ViDAR can detect a small raft at a range of more than 3.5 nautical miles, 20-foot fast boats at more than 9 NM and large ships at over 30 NM.

The hardware components of ViDAR are the optical pod, which contains the cameras, and the processor unit; importantly, this payload has only low size, weight and power (SWaP) requirements.

“Aerostats are the perfect platforms for wide-area surveillance systems as they are able to watch over fixed locations – such as coastlines – for literally weeks on end,” said Damien Tyrrell, Director of Business Development, Indo-Pacific at Sentient.

“As the world’s first optical radar, ViDAR offers a fast and efficient automated search capability. Whether it is fitted to a small unmanned aircraft or mounted on a large aerostat, ViDAR enables operators to get the most out of their surveillance assets.”