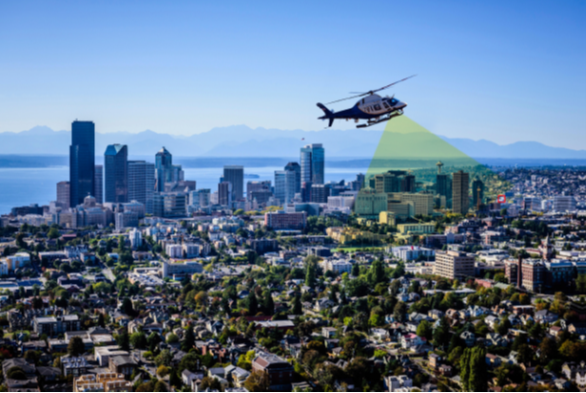 The movies have been promising this for ages: an airborne sensor that automatically spots a target at night, in the city or out in the fields.

Finally, it’s a reality. Life is now imitating art, thanks to Kestrel signal-processing software that makes it possible to automatically detect and track targets in both Electro Optical (EO) and Infrared (IR) imagery feeds.

Why is this important? After all, just about every airborne Law Enforcement (LE) platform has an EO/IR sensor that’s designed to help officers respond rapidly and then identify and pursue suspects by day and by night. The difference is that an officer aboard a helicopter needs to search actively: to sweep a sensor across the search area and watch the screen carefully to try and pick up targets, and then discriminate genuine targets from false alarms. Kestrel automatically augments the officer’s vision, indicating potential targets of interest that may often be too small to be seen easily, or that lie in the periphery of the frame.

Kestrel analyses the imagery delivered by an EO or IR sensor and automatically indicates moving targets in real time. It puts a red square around them and then tracks them as they move and if required leaves a ‘bread crumb’ trail showing where they’ve been. With over 3,000 units now in service, Kestrel is a proven TRL-9 capability with a high rate of success.

Importantly, Kestrel offers a 20x increase in surveillance area. How? Instead of having to get close to a target in order to conduct a painstaking manual search, Kestrel enables an airborne LE platform – it could be a helicopter, fixed wing aircraft or a UAV – to stand off and train its primary sensor on an area the size of a city block, or stadium or shopping center complex. Kestrel will spot and then track automatically anything that’s moving in the target area and allow the operator to focus more closely on targets of interest. It can detect targets as small as just two by two pixels in the camera feed.

Kestrel’s camera feed also generates meta-data that operators can use in real time, including the size, speed and direction of a target and its movement history. The technology is generic, generating a feed compliant with the STANAG 4609 and MISB 0601 formats.

Kestrel makes a big difference in several areas: firstly, it’s effective, so contributes directly to higher arrest rates and lower crime rates; secondly, it doesn’t interfere with the watermark or other tamper-evident signature that shows a court the imagery is of evidentiary quality; thirdly, it reduces operator fatigue which can lead to targets being missed, or patrols and response missions being less effective than planned – fatigue has a debilitating and cumulative effect on manpower, especially when a surge effort is required by an LE agency.

And fourthly, it challenges the high costs often associated with airborne LE operations: it provides enhanced performance for the money that’s already been spent and reduces the cost of airborne LE if an agency is planning a new generation of airborne support.

Furthermore, it works with archive or forensic video – if an agency has inconclusive surveillance video of a specific area, either current or archived, viewing it again using a Kestrel signal processor will show up any genuine targets that may not have been investigated before.

Kestrel is manufactured by an Australian company, Melbourne-based Sentient Vision Systems. It’s a proven, fielded system: more than 3,000 Kestrel systems are now in law enforcement and military service aboard manned aircraft and UAVs in 34 countries on six continents. It’s used for fixed wing and helicopter LE and anti-terrorist operations by operators as varied as the UK’s National Police Air Service (NPAS) at bases across England and Wales, a number of U.S. Marshals, State Patrols, County Sheriff’s Departments and Police forces in Germany and Australia.

The utility of Kestrel to the LE community is obvious. As well as a direct response to crime, it supports intelligence gathering, routine monitoring and pattern-establishment activities.

Its open architecture means it can be integrated easily with existing EO-IR cameras and aircraft mission systems, and not just airborne systems but also ground-based systems used to process and manage surveillance data.

Cost is a critical issue for LE agencies and every member of the U.S. Airborne Public Safety Association (APSA) grapples with this constantly. At its simplest, Kestrel is not a new camera or black box that needs to find space and a power supply aboard an aircraft or UAV. It is merely an extra piece of open architecture software that can be integrated easily into an existing surveillance or mission system and that enhances dramatically the capability of what’s already fitted to the aircraft. The only difference seen by the operator is the red square surrounding a target he or she wouldn’t have spotted before – but that makes all the difference.

However, Sentient Vision Systems can also provide computer hardware if required as part of a customer’s fitout or upgrade. Because the Kestrel software-based image processing system is middleware it is sensor- and mission system-agnostic. It can be integrated with any EO/IR turret and surveillance or mission management system aboard a manned aircraft or a UAV. And because it’s ideally suited to UAV operations, it enables an LE agency to create a cost-effective surveillance architecture that uses drones for routine surveillance and situational awareness and manned aircraft for direct response and tactical operations.

And if an aircraft is being pressed into service at short notice, integration is unnecessary –the imagery can be streamed by data link for real-time analysis on the ground or fed direct to a Kestrel-equipped laptop that the operator carries on and off the aircraft. There’s no special certification or ruggedization required for this, only a suitable network feed to aid analysis of specific video frames or provide them as part of an evidence pack.

And importantly, Kestrel is ITAR-free so it doesn’t require U.S. government approval to be integrated with a non-U.S. mission system or sensor.

The great thing about Kestrel, though, is that it has been proven in some of the world’s most unforgiving LE environments: it works, it’s low-risk and low-cost. Frankly, it’s a no-brainer.