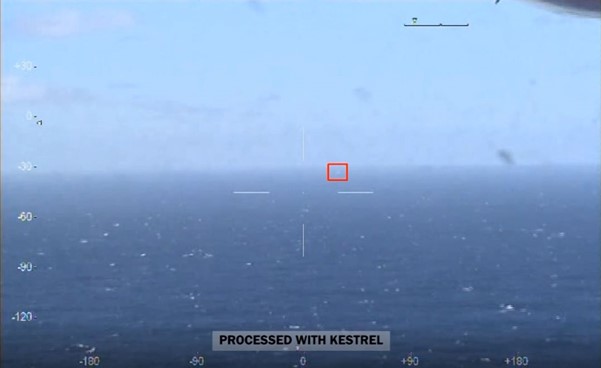 Wherever you find fish, you’ll find poachers. Or, rather, you won’t – at least, not always.

The world’s appetite for seafood is fuelling Illegal, Unregulated and Unreported (IUU) fishing activity on an unprecedented scale. Around the world, IUU fishers are plundering our oceans’ resources and using the vastness of the sea to help them get away with it.

For national governments – especially of small island states – and their maritime patrol and security agencies, the task of surveiling the oceans, deterring illegal fishers and bringing to justice those they catch is never-ending, and it’s getting harder.

This is where Kestrel Maritime can help. Manufactured in Melbourne by an Australian company, Sentient Vision Systems, Kestrel is an image processing software system that is a simple, cost-effective add-on to any airborne surveillance system – but it makes a disproportionate difference.

Kestrel Maritime analyses both Electro-Optic and Infrared (EO and IR) video feeds, frame by frame, and can detect targets that would be invisible to a manual operator. Even in Sea State 6, Kestrel can detect targets as small as a couple of pixels square that might be lost in darkness or haze or too small to be seen among breaking waves, and simply puts a red box around them on the operator’s display. That’s the only change an operator notices, but it makes a huge difference to mission success.

Kestrel Maritime will detect targets like small wooden or fibreglass vessels that are trying to avoid detection. It will detect illegal Fish Aggregation Devices (FAD) ranging in size from a couple of oil drums on a raft up to a large, manned platform. More importantly, it can help detect the small floats supporting so-called ‘ghost nets’ – the illegally deployed drift nets that live silently in the ocean, untended, and killing almost everything they encounter. Kestrel Maritime’s camera feed also generates meta-data that operators can use in real time to determine the geolocation, size, speed and direction of a target and its movement history.

Once a target is spotted, the operator can cue other sensors, or an overflight to confirm the sighting, or request the aircraft to stand off and shadow a suspect.

Patrolling sea areas looking for IUU fishers is a team sport and success requires coordination between sovereign governments and multiple agencies employing complementary technologies. It begins with intelligence and local knowledge of sea conditions and likely fish behaviour, and then moves on to maritime patrol by manned aircraft and surface craft. A well-designed command and control system that shares information quickly and coordinates joint effort is vital. Kestrel Maritime’s extra leverage can make these combined efforts infinitely more fruitful.

The Pacific Islands Forum Fisheries Agency (FFA) is a good example of a well-coordinated anti-IUU effort. The FFA has been in existence for 40 years and in 2020 it ran Operation Kurukuru, a combined effort by 15 Pacific Island states and four international partners, covering 21.3 million square kilometres of shared Exclusive Economic Zone (EEZ). Their target was IUU fishers plundering these nations’ sovereign resources. The operation was coordinated from the FFA’s Regional Fisheries Surveillance Centre in Honiara, Solomon Islands.

The FFA, like many regional authorities around the world, has only a small standing surveillance effort and brings together regional players to mount a seasonal surge effort. But the airborne assets deployed often aren’t ideally suited to lengthy maritime surveillance missions. A manually operated EO/IR system, for example, requires a trained operator; protracted manual surveillance demands high levels of concentration for long periods, so lengthy missions are very tiring. And many surface vessels and aircraft still depend on human operators equipped with hand-held binoculars and sensors. It’s effective but not cheap and success demands a huge combined effort by many dedicated players.

The difference Kestrel Maritime can make is this: it simultaneously offers a 20x increase in surveillance area and an extremely high probability of detecting a small, hard-to-spot target in rough seas and inclement weather, by day and night. It is therefore both a force multiplier and a deterrent. Furthermore, it doesn’t interfere with watermarks or other tamper-evident signatures that prove in court the imagery is of evidentiary quality; thirdly, it reduces both operator fatigue and wear and tear on aircraft.

And fourthly, it extracts greater value from the money spent on high-cost Maritime Surveillance operations. Once fitted, it enhances performance. And it can make an all-new surveillance architecture more cost-effective, for example by enabling a mix of land- and ship-launched UAVs equipped with Kestrel Maritime to conduct routine surveillance and help build up a Common Operating Picture (COP), with more expensive manned patrol vessels and aircraft responding to contacts and investigating suspect vessels.

Kestrel Maritime is a simple software add-on to an existing mission system: being open-architecture middleware, it is mission system and data link-agnostic and easily integrated. It generates data compliant with the STANAG 4609 and MISB 0601 formats. Also, being software, its Size, Weight and Power (SWaP) demands are tiny so it’s easily fitted to a UAV or a manned aircraft. And it can be used to analyse existing forensic or archive data from earlier operations in order to spot previously undetectable patterns of behaviour or the use of illegal assets. Importantly, Kestrel Maritime is ITAR-free and proven in operations for over 12 years.

Where aircraft are being pressed into service on an ad hoc basis, full integration is unnecessary. Imagery can be streamed by data link for real-time analysis on the ground or fed direct to a Kestrel-equipped laptop that the operator carries on and off the aircraft.

Some 3,000 Kestrel systems are now in service aboard manned aircraft and UAVs with governments and law enforcement agencies in more than 50 countries on six continents. It has been proven in unforgiving maritime conditions. It works, it’s low-risk and cost-effective.