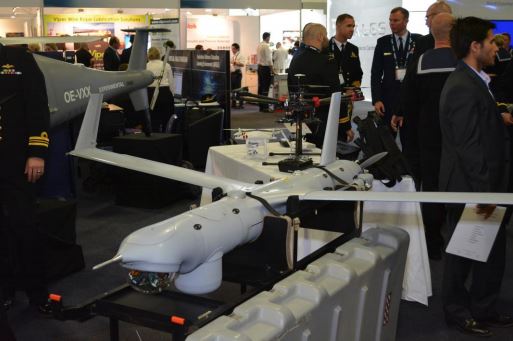 October’s Pacific Maritime 2017 exposition in Sydney gave the Australian Defence Force a podium to highlight that future naval platforms will be nodes in a data network, with unmanned vehicles playing increasingly critical roles above, on and beneath the waves.

For industry, it was a platform to show that many of the unmanned vehicles and systems Defence will need in the future could easily be stamped Made In Australia.

Examples of existing innovation were on show, from Sentient Vision Systems’ Visual Detection and Ranging optical radar package installed on an Insitu ScanEagle UAS in the Defence exhibition area, to the innovation award winning Ocius Bluebottle unmanned vessel that generates power from solar, wind and wave motion at sea.

Such is the rapid pace of change in the unmanned vehicles world that on confirming at the Australian Association of Unmanned Systems (AAUS) conference that a premier naval UAS program, SEA129 Phase 5, had been delayed for two years, Naval Aviation Capability Program manager CMDR Philip Woodward’s first question from the audience asked his views on whether such a delay may require the release of a new Request For Information to industry once the process is back on track, in order to be aware of new developments. The CMDR agreed, indicating he would be open to the possibility of a second RFI.

Navy has a strategy, roadmap and milestones for unmanned vehicle systems and is beginning to build a test and evaluation track record.

In his presentation to the AAUS conference, the Royal Australian Navy’s Director of Mine Warfare, Clearance Diving, Hydrographic, Meteorological and Patrol, CAPT Nicholas Stoker, detailed how unmanned underwater and aerial vehicles will one day extend the “eyes and ears” of submarines in hostile waters, provide targeting and guidance for long range torpedoes and assist submarines in navigating minefields.

Surface vessels will also use unmanned systems for mine countermeasures and intelligence gathering, providing a forward “radar picket” and even hydrographic survey. Navy’s planned vessels, the Hobart-class DDG, Future Frigate and Offshore Patrol Vessels, will all incorporate unmanned systems.

To break unmanned systems operational development down in to manageable tasks, Navy has created a development roadmap with four major phases.

Phase One – Foundation, will conclude in 2018, designed to establish relationships between defence, industry and academia. This phase is including practical testing, with Navy announcing just this week that it had concluded an operational evaluation of the Insitu ScanEagle unmanned aerial system aboard the Adelaide-class guided missile frigate HMAS Newcastle in the Gulf of Oman as part of the ship’s Middle East deployment under Operation Manitou.

Equipped with Sentient Vision’s ViDAR optical radar system, four ScanEagle systems worked up with the ship and with its embarked MH-60R anti-submarine and anti-surface helicopter.

Phase Two of Navy’s development plan will see unmanned systems enter service for mine warfare and hydrographic applications from 2018 to 2022, including a re-aligned SEA129-5 unmanned aerial vehicle buy.

By 2024 Navy will be ready to implement Phase 4, which will help define the future of unmanned systems application in the Australian naval context and expand their use beyond the littoral warfare domain.

Navy has long known that it can’t complete the roadmap by itself, and intends to build a strong relationship with industry to understand both the technologies that could be part of Defence’s requirement, and their applications.

Industry is being asked to get involved in four major workstreams to support the roadmap. Technology development will see defence and industry working together to expand on current industry applications, while tactical development will create an improved understanding of the capabilities and limitations of systems as part of a process Navy is calling Capability Realisation.

Defence also wants a robust approach to the risks associated with developing revolutionary technologies, and how unmanned systems development fits with Defence’s recent Fundamental Inputs to Capability approach to industry.

Defence has also identified that legislative requirements will need to understood as the evolving rules surrounding unmanned vehicles create challenges for operators.