Discovery of the wreck of AE1, the Royal Australian Navy’s first submarine

Discovery of the wreck of AE1, the Royal Australian Navy’s first submarine, has solved one of Australia’s enduring maritime mysteries and identified the navy’s last undocumented war grave more than a century after the vessel went missing in the early days of the First World War.

On December 21 last year Federal Minister for Defence Marise Payne announced that a new search jointly funded by the Australian Government, the Silentworld Foundation, the Australian National Maritime Museum and Find AE1 Ltd had found the submarine in more than 300 metres of water off the coast of the Duke of York Islands to the north east of Papua New Guinea. The location is being kept secret to prevent illegal salvagers and souvenir hunters from disturbing the wreck, which is believed to still contain the bodies of 35 crewmen.

The 55-metre HMAS AE1 was Australia’s first submarine, commissioned with sister E-class vessel AE2 in 1914 in England and sailed to Australia via the Suez Canal in what was the longest submarine transit in history at that time.

Equipped with four torpedoes, she was capable of 10 knots submerged and 15 knots surfaced, with a range of almost 6000 kilometres.

Crewed with Royal Navy and Royal Australian Navy personnel, AE1 was lost just 40 days after Australia committed to World War One, the first loss for the RAN and the first Allied submarine lost in that conflict.

AE1 was patrolling the waters of the Duke of York Island group as part of a campaign by the Australian Naval and Military Expeditionary Force to eliminate the German presence in the region and destroy German wireless communication stations.

She was lost with all hands on 14 September 1914 after parting company with RAN destroyer HMAS Paramatta on a routine patrol, her fate unknown and with no trace of the submarine or its multi-national crew being found until 2017 despite a dozen search projects.

Although no definitive cause has yet been identified for AE1’s loss, submarine technology and operation were still in their infancy in 1914, with buoyancy and control issues often sending vessels out of control while surfacing or diving. AE1 is believed to exhibit signs of an uncontrolled dive and collision with the sea floor.

In the year following AE1’s loss sister ship AE2 gained fame by negotiating the treacherous Dardanelles Strait between the Aegean Sea and the Sea of Marmara on the eve of the April 1915 Gallipoli landings, with orders to “run amok” and harass Turkish ships that would be used to resupply their forces on the Gallipoli Peninsula.

She lasted five days before the crew lost control while surfacing, exposing her to gunfire from a Turkish torpedo boat that damaged her engine room and forced her commander, Royal Navy Captain “Harry” Stoker to abandon ship and scuttle the 700-tonne submarine with no loss of life.

AE2’s resting place was discovered in 1998 in 74 metres of water. Although the vessel has been left in place, an Australian preservation team has attached more than 10 tonnes of zinc anodes to AE2, slowing its rate of corrosion by almost 50 per cent.

The discovery of AE1 has created both relief and sadness in the Australian submarine community. “The fact that HMAS AE1, Australia’s first submarine, has been found is both a satisfying and sombre occasion,” said Submarine Institute of Australia president Mark Sander.

“The thoughts of the submarine community are overwhelmingly with the relatives of the 35 crew members who were on board HMAS AE1 when it went missing. This is an incredibly important event for all submariners and Australia’s submarine history, indeed Australia’s war history.

“HMAS AE1 marked the formal commencement of Australia’s submarine capability, which is why the mystery of not knowing its fate and final resting place has been a missing link until now.” 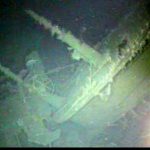 HMAS AE1s helm and forward and aft periscopes. *** Local Caption *** After 103 years since her loss, HMAS AE1 was located in waters off the Duke of York Island group in Papua New Guinea in December 2017. The Royal Australian Navy and the Silentworld Foundation commissioned the most comprehensive and technologically capable search ever committed to finding AE1 and the 35 Australian, British and New Zealand men entombed within. The team of maritime surveyors, marine archaeologists and naval historians scoured the search area with a multi-beam echo sounder and side-scan technology in an underwater drone flying 40 metres above the sea bed on pre-programmed 20 hour missions. The data collected was analysed and a three-dimensional rendering of the underwater environment was produced before dropping a camera to confirm the find. The search led by Find AE1 Limited, and was funded by the Royal Australian Navy and the Silentworld Foundation, with assistance from the Submarine Institute of Australia, the Australian National Maritime Museum, Fugro Survey and the Papua New Guinea Government.