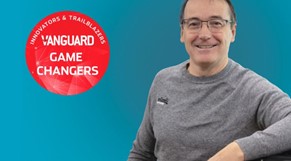 “Of course, we eventually needed income, so we decided to build something we could sell, an AI product, called iSentry. It was way ahead of its time. It used AI to learn to detect unusual behaviour in CCTV footage. But like typical start-up founders, we didn’t know how to commercialize it. Eventually, we got resellers interested, and, skipping forward several years, the same resellers bought the IP,” said Dr. Boxer.

During the early days of his company, the Australian Defence Science and Technology Organization bought an iSentry license from them.

“When we visited to install it, they showed us a very early MTI (Moving Target Indication) program they were developing. Unfortunately, it was 1,000 times slower than real-time. I asked if they would be interested in doing that in real-time. They were and agreed to buy our very first MTI license if we could demo it,” he said.

He went on to explain that the only airborne imagery they could find at that time was a scene from Lord of the Rings, so their first version of MTI software tracked Gandalf riding through a forest. It worked, and they received further support to develop another project. “That was back in 2005. It was our first big break and it led on to our first sales into the Australian Defence Force,” he added.

Dr. Paul Boxer was selected as a Game Changer for the October/November 2020 issue of Vanguard.